There are 13 primate species that occur in Nyungwe and this represents like 20-25% of the total number of primates in Africa. This is a remarkable figure that in East Africa is compared only to Uganda’s Kibale Forest. More so, many of the rimates are also listed as endangered on the IUCN red list and Nyungwe is also the main stronghold for two of them.

The most of the celebrated of these primates include the

which is also a race of the wide spread Angola Colobus that is restricted to the Albertine Rift. This Rwenzori Colobus is acrobatic and arboreal leaf eater that is easily notable from any other type of primate found in Nyungwe just by contrasting black over all colours and snow white whiskers, the shoulders and the tail tip. Even though all the colobus monkeys are so sociable, the ones in Nyungwe are also unique since they move in troops of many animals. There is a semi habituated troop of over 400 and are residents in the forest around the campsite and the largest troop of the arboreal primates in Africa or elsewhere in the world. There are also the Chinese golden monkeys that move in groups of a similar number. Most of the monkeys in this park are Guenons, which is also a collective name for the taxonomically confusing cercopithecus genus. 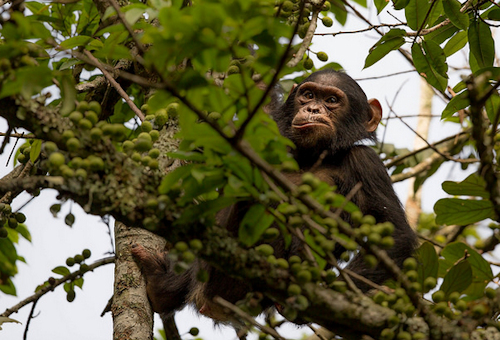 The other types of monkeys found in the ark also include;

that is a savannah monkey and is infrequently seen along the road through Nyungwe, Grey cheeked mangabey is also an arboreal monkey of the forest.

More so, to the chimpanzees  and monkeys, this national park has four types of Prosimian, the small nocturnal primates that are more closely related to the lemurs of Madagascar than to any other primates of African main land. There are the three species of bush bay or the Galago; the group of tiny, eye insectivores and hyper active wide) and these are like the potto and these are also more likely to be met by the tourists.

These are black with white ornaments and in case you observe them with in the forest as you track them, you will be amazed how large the group is, these are over 350 to 400 individuals in a group comprising the largest group of the Angolan Colobus Monkeys in Africa. The trek of these monkeys is not as tireless as the chimpanzee trek tends to be and the pure number of them with in the tree tops, the chat of this group delights the guests including their messy eating habits that also help spread the seed of the fruit that they are eating in the forest.

In case you want to see the Angolan Colobus Monkeys in variety than the trek, this will be a nature walk and is also a perfect morning activity for any visitor. This specie walk has more got more than seeing the Colobus monkeys, but you will view many other primates, birds and the vegetation of this montane forest.

These are referred to as the mountain monkeys and are endemic to the albertine Rift and you can also find them in Rwenzori Mountains and Bwindi impenetrable forest of Uganda and in Rwanda, they can be seen in Nyungwe and Gashwati forest and it’s in the process of being restored to be a national park.these have got dark black bodies with a fuzzy white beard, they move on all the fours when on the ground as they also forage for good. The males weigh between 5 and 7 kilos and the females are also smaller in size. These one also spend their time in the forests which are found in Nyungwe Forest. Their smaller groups are also dominated by the females with normally one which makes the group to be often seen from the main road that cuts through the forest near the Unwinka reception center to the forest.

This is the most unique species and has got a break like nose and the face that looks like an owl. It’s shy and is rarely seen buy you just might be as lucky as you hike along the many trails of the forest.its closely related to the L’Hoest monkey and live in small groups on one male and many females. Since they are so subtle, they have been hard to study. These have got a white stripe that goes from the top of the lip to the top of the nose given the owl monkey and the Owl face.

These are found in Nyungwe forest and they can be found with other species like the blue monkeys, or the grey Mangabeys as well as the large groups of Ruwenzori Colobus Monkeys. Their groups are relatively smaller with one male surrounded by his Harem, and once again with other monkeys and its female that rules the group. These have also got long black tail, a white rump and the brown back. Their faces are quite furry and when these find food, they carry it off with their large cheek pouches. These also like fruit but at times will eat leaves and insects.

This name might be so confusing since in real sense, the blue monkey is not blue. Its exact colors are light grey and an olive fur that gives off its kind of the blue hue as they are in the tree tops. These also live in the tree tops that makes up the forest canopy of Nyungwe forest which means that you have to look up in order to see them while on the trails in Nyungwe forest. These also rarely come down to the forest floor but find the food and shelter in the tree tops. These monkey types also live in female groups of about 10 to 40 with only one male. All the female monkeys raise each other’s young ones. These are tree dwelling monkeys and can be found around Uwinka visitor’s center in Nyungwe Forest.

This is also a grey Guenon which is also common in East Africa including Rwanda in Nyungwe Forest and can be found around the Gisakura Guest House. These also can be found in the savannah and open woodlands including in Akagera National Park. These also like the baboon’s raid crops and once again enter homes to look for food. They have also got black face mask and the rest of the body is grey. This is also the most frequent monkey in the world and is common even in Rwanda. There are also no vervet monkey treks, you just meet them and enjoy.